YOU ARE HERE Home Our Products UV Decontamination Tunnel

Asmech Systems Ltd in association with UV Technology Ltd reveal their latest UV Sausage Decontamination Tunnel. Asmech were responsible for the design and manufacture of this UV decontamination conveyor to transport sausages between a decline conveyor and a loading machine. The conveyor used 4 UV-C cassettes to decontaminate the sausages.
The conveyor was manufactured from stainless steel and featured an Open Mesh Stainless Steel Wire Belt and SEW Geared Motor unit. 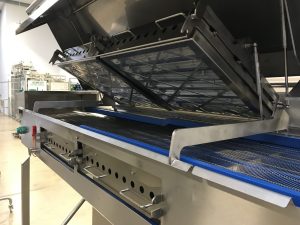 What is UV-C —– “BRINGING THE POWER OF SUNLIGHT INDOORS”