History of the conveyor belt 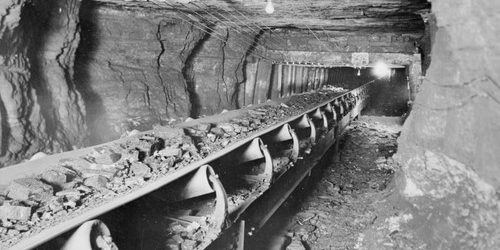 Conveyor belts are a common sight in most modern warehouses, proving the perfect solution for the transportation of goods saving time, costs, and manual labour. In this blog we look at the history of where it all started and the journey to now.

The very first notion of conveyor belts dates back as early as 1795, where mechanical systems were used instead of electric.  These systems used a wooden frame and had belts made of rubber and fabric.  They were mainly used in the agricultural industry by farmers needing to move large amounts of grain to save on hard back breaking work.

But in 1892 Thomas Robins began working on numerous inventions that resulted in a conveyor belt used to transport coal, ores, and other related materials that started the foundations of the modern conveyor system.

In 1902 Sandvik, a Swedish engineering company, started producing the very first steel conveyor belts and in 1905 Irish born but English based engineer Richard Sutcliffe invented conveyor belts intended for use in coal mines.  This was a revolution for the mining industry in its efficiency.

Innovations continued with a big change in 1913 when Henry Ford introduced the assembly line to the conveyor belt system, transforming the world of mass production.

And again, jumping up to 1957 when the B. F. Goodrich Company patented a more durable conveyor belt called the Turnover Conveyor Belt System that incorporated a half twist in the belt during operation meaning both sides were exposed to wear and tear being they would last longer.

In 1975, a Louisiana based company called Intralox paved the way for plastics in conveyor belts when they patented the first plastic modular belt. This was ground-breaking for the food production industry as the rust and corrosion that built up on metal belts were unsafe for the transportation of food goods.

Up to the modern day and plastic belts contain polypropylene, polyethylene or acetal thermoplastics.  They can travel round corners, along inclines and declines, and can be optimised with robotic automation.  Conveyor belts have come a long way in their history!

For more information on modern conveyor belts and how to add automation to your warehouse, please contact us.